As part of activities marking this year’s World Malaria Day, Reckitt Benckiser, the market leader in health, hygiene and home care products segment through its leading anti-malaria power brand, Mortein has joined forces with the Lagos State Government and other stakeholders to upscale action for the elimination of malaria in Nigeria through community engagement. 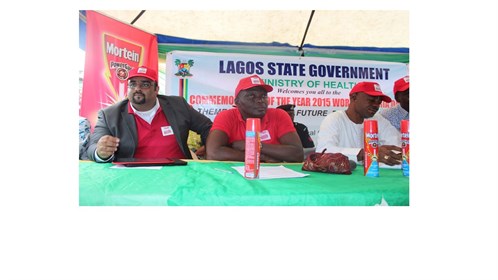 Specifically the community engagement which held at Palm Avenue, saw officials from the state Ministry of Health and Reckitt Benckiser carry out the clearing of wastes and drainages in the area. They also went round the community to sensitise and educate residents on the immense benefits of maintaining clean environment as one of the most cost effective ways to reduce mosquitoes which are the major carriers of malaria parasite. 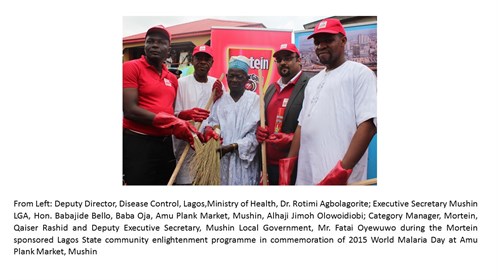 Speaking at the event, Category Manager, Pest care, Health care, Air care, RB West Africa, Qaiser Rashid, said the community engagement was part of numerous corporate social responsibility initiatives by Reckitt Benckiser to stem the prevalence of malaria scourge in Nigeria and Africa as a whole. She said the partnership with the Lagos State Government, which has been on-going for years, also demonstrates the company’s commitment to the anti-malaria fight in the state.

“We have come out again today on the occasion of the 2015 World Malaria Day to demonstrate our commitment to making Nigerians live healthier and happier life. The community engagement is another innovative ways we have chosen to educate residents of Mushin on the importance of hygiene, and how simple habit of maintaining clean surroundings and drainages can significantly help to reduce malaria.

‘‘Mosquitoes are carriers of malaria parasite and they breed in dirty environment. Keeping the environment clean means that mosquitoes have no breeding place, if we can stop the life circle of the insect through constant cleaning of our environment and application of the insecticide that have the ability to kill mosquitoes 100 percent, that means we have succeeded in killing the disease,” he said. 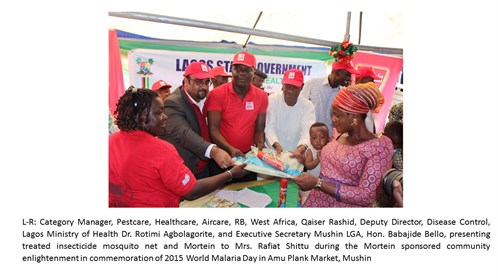 Commissioner for Health, Lagos State, Dr. OlajideIdris who was represented by Deputy Director, Disease control, Lagos State Ministry of Health, Dr. RotimiAgbolagorite in his address said this year’s World Malaria Day commemoration aims at drawing significant attention to the additional effort required in achieving the targets of the Millennium Development Goals (MDGs) in 2015. “Despite the huge investment in malaria control and the significant impact in the decline in malaria mortality, an estimated 198 million cases on malaria occurred globally in the year 2013 and 584,000 death were recorded, most death recorded affected children below 5 years old. He said